The MBx Interoperability Forum (MBx-IF) is a group of software developers and testors working on Computer Aided Design (CAD) and Computer Aided Engineering (CAE) translators based on the ISO 10303 -- STandard for the Exchange of Product model data, STEP (visit this ISO site for more information on the STEP standard).

This interoperability testing forum was started in February of 1995, focused on the CAD domain, and was initially called Plugfest.

Tools Inc., and International TechneGroup Incorporated. Plugfest was initially supposed to be a single event. However, the value of this interoperability testing was immediately apparent and it was decided to continue the testing in a distributed manner over the Internet. The group decided to call this original testing forum STEPnet. From this forum a comprehensive infrastructure of testing procedures, tools, and techniques has been established.

The prostep ivip Association, which was founded in 1993 to secure and carry on the results of the ProSTEP research project, also started its RoundTable activities with a number of CAD vendors in 1994, focused around the development of AP214. Here, too, the initial testing evolved into an ongoing distributed forum to support both the STEP processor developers as well as the standardization groups. With its about 200 members, the prostep ivip Association was able to provide requirements and quality criteria to the test forum, and in return prove the stability of the created processors in the Benchmarks, eight of which were conducted between 1996 and 2003.

In 1999, PDES, Inc. and the prostep ivip Association combined their interoperability testing forums and called it the CAx - Implementor Forum, from now on MBx - Interoperability Forum.

In 2014, the LOTAR Engineering Analysis and Simulation working group (EAS WG) emphasized the need to extend the scope of the MBx-IF to the CAE domain. After running some pilots tests in 2016-17 within the framework of the LOTAR project, the CAE Implementor Forum (CAE-IF) started officially as a working group of the MBx-IF by launching its first testround, Round 1S, in September 2017.

In 2016, AFNeT joined the team in order to share their experience and to support the extension of the MBx-IF to new domains, such as Computer Aided Engineering (CAE).

As of March 2018, the MBx-IF has been in operation for almost nineteen years, has completed 41 rounds of interoperability testing in the CAD domain, and one round in the CAE domain.
An article on the first ten years of CAx-IF testing was published in prostep ivip’s Product Data Journal. 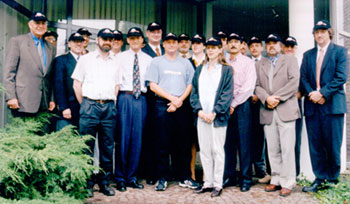 Participants at the 1st CAx Implementor Forum in Darmstadt, Germany (1999) 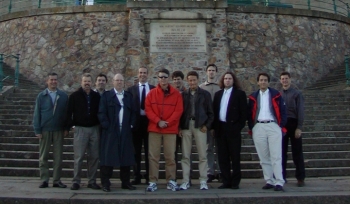 Participants at the 12th CAx Implementor Forum in Darmstadt, Germany (2003)